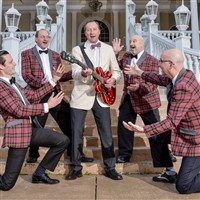 Bill Haley Jr & The Comets "Rock Around the Clock"

Bill Haley & His Comets was an American rock and roll band that was founded in 1952. Today, his son Bill Haley Jr and The Comets show is a high energy five piece combo performing a rousing, crowd-pleasing set of songs first recorded at the dawn of Rock N Roll by the legendary Bill Haley and The Comets “Rock Around The Clock”, “See Ya Later Alligator”, “Shake, Rattle & Roll”, “Razzle Dazzle” along with other popular tunes from the 50’s and 60’s. The show features the inside stories behind the songs he sings backed by his talented band of Comets. Be prepared to Jump, Jive, dance, clap, and stomp your feet and sing along as Haley and His Comets Rock the Joint. Spend the afternoon reliving the songs that shaped Rock N Roll.

*No one under the age of 21 is allowed on a Mount Airy Casino Resort Tour.

*A Valid Government Picture ID is mandatory to receive a slot card and bonus awards.

Below is a list of pick-up points available on this tour.

Below is a list of pick-up points available on this tour.

It is not possible to display the map. This may be due to Google Maps not being supported in your browser.

Search The location was not found

There are currently no departures available on this tour.

The website timed out while searching for the departure dates. Please try again.